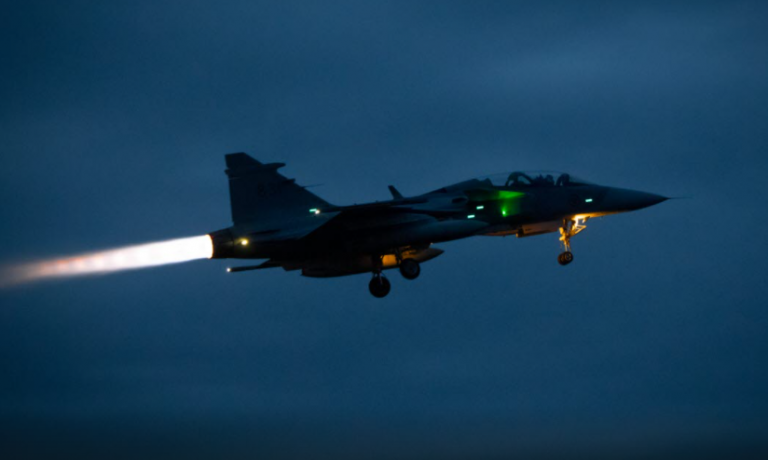 The Gripen aircraft
Several successful test flights have been conducted with the Swedish air force’s JAS 39 Gripen using a mixture of fossil-free fuel.
Ongoing tests have shown good aircraft performance with the biofuel when compared to traditional jet fuel.
Testing continues and the Swedish Armed Forces is closely following the biofuel project that the Swedish Defence Materiel Administration (FMV) is conducting together with GKN Aerospace Engine Systems Sweden in Trollhättan.
Engine tests have been performed in order to study possible differences in performance and engine function when using a 50/50 mix of biofuel compared to performance in engines using only jet fuel. The tests showed that the engine using biofuel had unchanged performance both regarding thrust power and fuel consumption.
“This is an important project for the Swedish Armed Forces’ development activity as Sweden aims to become climate neutral by 2045. The conducted tests are very positive and we look forward to the next step with confidence," says Brigadier General Gabor Nagy, fighter pilot and head of the Swedish Armed Forces’ Total Defence Department.
More testing is to be conducted by the Swedish Defence Research Agency during the first quarter of the new year.
Then, the FMV, together with their US cooperation partner USAF/NAVAIR, will evaluate the biofuel project and present a conclusion of the tests. The Swedish Armed Forces will receive the FMV’s final report on the project later in 2021.