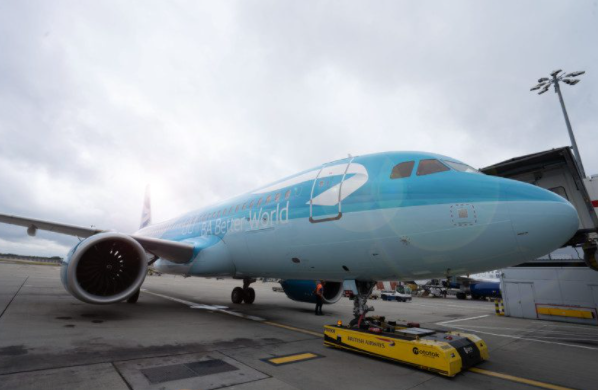 The Department for Transport has awarded Project Speedbird, a partnership between Nova Pangaea Technologies, British Airways, and LanzaJet, £484,000 (€571,000) to fund a feasibility study for the development of sustainable aviation fuel (SAF) in the UK.
The funding was awarded as part of the UK Department for Transport’s Green Fuels, Green Skies (GFGS) competition to develop sustainable aviation fuel, announced earlier this year.
Project Speedbird collaboration will begin early-stage development of the UK’s first integrated SAF production facility utilising wood waste and support UK SAF sector growth by deploying innovative production technologies at a commercial scale. It will also help the UK meet its goal of reducing aviation sector emissions.
Starting in 2025, Project Speedbird will begin to recycle carbon from UK wood waste into 113 million litres of SAF and renewable diesel (RD) per year, to meet the current SAF supply-demand gap in the UK.
The fuel produced is projected to power 2,000 British Airways’ flights from London to New York operated on the airline’s A350 aircraft.
The ground-breaking Project Speedbird SAF Production Facility will utilise an integrated technology platform based on Nova Pangaea’s REFNOVA® process.
Sarah Ellerby, CEO at Nova Pangaea Technologies, said:  “We are very excited to have been granted GFGS funding to develop sustainable aviation fuel and proud to partner with British Airways and LanzaJet, in support of the Prime Minister’s Ten Point Plan for a Green Industrial Revolution which was announced last year.
“We want the UK to be a world leader in SAF and to do this we have to be ambitious and embrace innovation.  There is no doubt that this will help to move us towards decarbonising the aviation sector.”
Sean Doyle, British Airways chairman and CEO, said: “We’re committed to a sustainable future and to achieving net zero carbon emissions by 2050 and have built a clear roadmap to get us there. In the short-term this means improving our operational efficiency and using carbon offset and removal projects while in the medium to longer term we’re investing in the development of sustainable aviation fuel and looking at how we can help with the growth of zero emissions hydrogen-powered aircraft and carbon capture technology.
“We’re delighted to receive this crucial support from the Government’s Green Fuels, Green Skies competition, which is critical in driving forward the development of sustainable aviation fuel in the UK.”
Jimmy Samartzis, LanzaJet CEO, said: “This is an important milestone for the aviation industry in its transition towards cleaner skies. The partnership between Nova Pangea Technologies and British Airways, along with the grant made through GFGS, is critical to advancing the Prime Minister’s Ten Point Plan for a Green Industrial Revolution and advancing the technology that exists today to reduce aviation sector emissions. Using LanzaJet’s ATJ technology to transform wood waste from the UK into 100 million litres of SAF per year, starting in 2025, will help the UK meet its goals and position the UK as a global leader in embracing new technologies to meet some of our world’s greatest challenges.”
Don't forget our world-leading Biofuels International Conference and Expo takes place in Brussels on March 15-16 with some great speakers participating. For more information go to https://biofuels-news.com/conference/