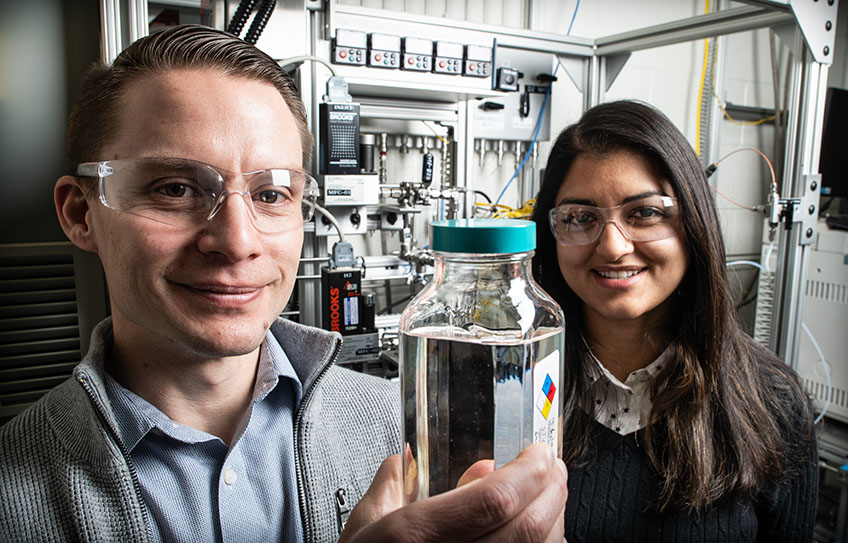 Derek Vardon and Nabila Huq display a container of high-performance ether diesel bioblendstock manufactured at NREL. Credit: Dennis Schroeder/NREL
Researchers at the National Renewable Energy Laboratory (NREL) have discovered a novel oxygenate molecule that can be produced from biomass to be used as a blend for diesel fuel.

The research of the initiative focuses on improving fuel economy and vehicle performance while reducing emissions.

“If you look at biomass, 30% of it is oxygen,” explained Derek Vardon, a senior research engineer at NREL. “If we can figure out clever ways to keep it around and tailor how it’s incorporated in the fuel, you can get a lot more out of biomass and improve the performance of diesel fuel.”

The molecule, 4-butoxyheptane, contains oxygen while conventional petroleum-derived diesel fuel is comprised of hydrocarbons. The presence of oxygen significantly reduces the intrinsic sooting tendency of the fuel when burned.

The research paper, titled ‘Performance-Advantaged Ether Diesel Bioblendstock Production by a priori Design’, was published in the journal Proceedings of the National Academy of Sciences.

The team used corn stover-derived molecules as the starting point for a range of potential fuel candidates. From here, the researchers relied on predictive models to determine which molecules would be best to blend with and improve traditional diesel.

“With the goal of developing drop-in biofuels that work with our existing infrastructure there are a lot of rules and regulations out there that a fuel has to meet,” Vardon added. “That eliminates a lot of promising molecules because they may be great in certain properties but fail in others. As we’re doing this process, it started to become clear which molecules could be successful fuels.”

The intention is to blend the 4-butoxyheptane molecule into diesel fuel at a mixture of 20–30%. Initial results suggest the potential to improve ignition quality, reduce sooting and improve fuel economy of the base diesel at these blend levels.

However, further research is needed according to first author Nabila Huq from NREL, including testing the bioblendstock in an engine and producing the fuel in an integrated process directly from biomass.

“That first step was just seeing what could rise to the top as far as fuel properties go,” Huq said. “Then it was asking, can we make any of these? The molecule that looked most promising was 4-butoxyheptane, and we were able to successfully produce and characterise it.”

The molecule didn’t exactly match the predicted fuel properties but came close enough to meet the desired performance improvements. An economic and lifecycle analysis showed that the oxygenate fuel could be cost-competitive with petroleum diesel and result in significant greenhouse gas reductions if the process also yields a high-value co-product such as adipic acid, which is used in the manufacture of nylon.

The Co-Optima initiative is supported by funding from the DOE’s Office of Energy Efficiency and Renewable Energy’s Bioenergy Technologies and Vehicle Technologies offices.