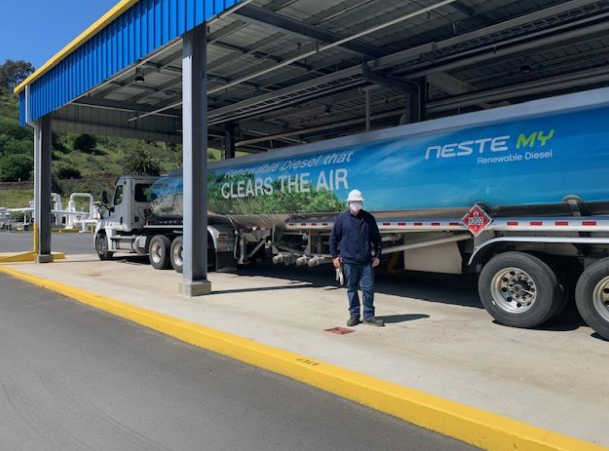 Neste and NuStar Energy revealed that supply trucks are now able to load Neste MY Sustainable Aviation Fuel (SAF) at the Selby Terminal, near San Francisco.
The first gallons for the NuStar-operated facility have been safely picked up and delivered to the nearby Monterey Regional Airport.
Due to the strategic location of the Selby Terminal, Neste and its partners Avfuel and Signature Flight Support are now able to supply SAF to a growing number of airports.
“We must act now to reduce emissions from air travel in order to preserve the many benefits flying brings to our lives and the economy,” said Chris Cooper, vice president for renewable aviation for Neste in North America. “Sustainable aviation fuel is one of the easiest ways to do this, allowing aircraft and passengers to fly much more sustainably starting right now.”
This is the latest collaboration between Neste and NuStar to bring SAF into the US.
In 2020, Neste established a continuous supply of SAF to San Francisco International Airport from NuStar’s Selby Terminal using an existing pipeline – a first for the industry.
“We are excited about this project as it fits into our strategy for growth by continuing to improve utilisation of existing assets while executing NuStar’s renewable fuels strategy on the West Coast. And we are proud to partner with an industry leader like Neste,” said NuStar president and CEO Brad Barron.
“We are pleased to have established NuStar as an early mover and leader in the renewable fuels space with a number of renewable fuels projects with other key customers throughout the region.”
NuStar handles and stores a significant proportion of the total low-carbon fuels volumes utilised in California, including nearly 27% of renewable diesel, 18% of ethanol, and 6% of biodiesel.