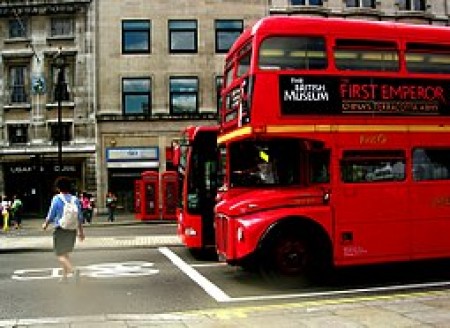 Image by Gideon (originally posted to Flickr as London The Red City) [CC BY 2.0 (http://creativecommons.org/licenses/by/2.0)], via Wikimedia Commons

Biofuel created from waste coffee grounds is helping to power some of London’s buses, the BBC reports.

Technology firm bio-bean creates a biofuel by blending oil extracted from coffee waste with diesel. According to the company, it has now produced enough coffee oil to power one bus for a year.

Transport for London, the local government body responsible for the transport system in the British capital, has increasingly turned to biofuels to reduce the city’s problematic transport emissions. According to the BBC, biofuel made from waste products such as cooking oil and tallow from meat processing is already used in many of the capital’s 9,500 buses.

Founded in 2013 by Arthur Kay, bio-bean claims to be the first company in the world to industrialise the process of recycling waste coffee grounds into advanced biofuels and biochemicals. According to bio-bean’s website, the company collects waste coffee grounds at every scale “from independent cafés to major coffee chains and from universities to property groups and instant coffee factories.”

Oil is extracted from the collected used coffee grounds in bio-bean’s factory and processed into a blended B20 biofuel. Buses can be powered using the fuel without any modification.

The firm believes it would take just over 2.55 million cups of coffee to create enough biofuel to run a London bus for a year, once the oil has been blended with diesel. So far, six thousand litres of coffee have been produced.

“It's a great example of what can be done when we start to reimagine waste as an untapped resource,” Kay told the BBC.

Image by Gideon (originally posted to Flickr as London The Red City) [CC BY 2.0 (http://creativecommons.org/licenses/by/2.0)], via Wikimedia Commons