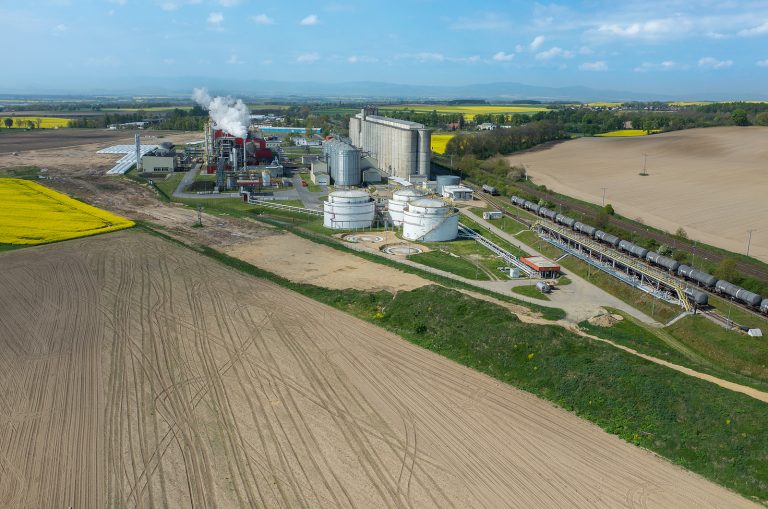 The emergence of biodiesel as an alternative fuel substitute for traditional petroleum-based fuels has changed the way the country produces energy.
Biomass is one of the most abundant renewable resources and therefore has led to much attention and research to produce fuels from it.
Due to the majority of biomass being composed of carbohydrates, biomass is considered to be the ideal feedstock for the production of biofuels.
Biomass energy production, which includes biomass-derived biodiesel, in the US, amounted to 4.69 quadrillion British thermal units (Btu) in 2021.
This usage trend, shown in Figure 2, will continue to show a positive increase and will eventually reach an estimated value of 5.56 quadrillion Btu by 2050. Compared to the breakdown shown in Figure 1 of the 2020 United States energy consumption data, renewable energy consumption will undergo a massive increase in the future. In combination with all other renewable and sustainable energy sources, renewable energy is projected to be 44% of the consumed energy in the United States by 2050 with approximately 40% of that being biomass-derived fuels.
The continued research and experimentation with biodiesel have been driven by the immense environmental benefits of the fuel compared to the commonly used petroleum diesel. Specifically, biodiesel produced by resources, biomass, such as plants allows the fuel-making process to be carbon-neutral. 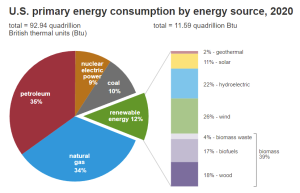 This is due to the fact that the resources capture approximately the same amount of CO2 through photosynthesis while growing as is released when biomass is burned [2].
The process of transforming biomass via catalytic conversion into biofuels is often done using different approaches based on the chemical compositions of the biomass. The most relevant path utilises transesterification, catalytic cracking, and hydrotreatment to produce different types of biofuels within the gasoline and diesel range from the lipids and oils extracted from biomass. 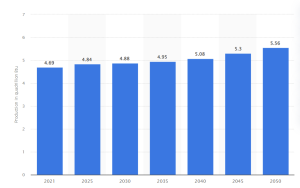 Pathways using lignocellulosic biomass, the most abundant biomass resource, are currently being explored to expand the production of biofuels. Lignocellulose, plant-based biomass, is composed of cellulose, hemicellulose, and lignin polymers as the major components with a percent dry weight of 30–35%, 20–25%, and 15–20%, respectively.
The processes to transform lignocellulosic biomass into biofuels include gasification (usually combined with Fisher-Tropsch synthesis), pyrolysis, liquefaction, hydrolysis, and aqueous phase reforming. For the effective conversion of carbohydrates into chemicals and fuels, an appropriate catalyst plays a crucial role in achieving high conversion and high selectivity.
In this paper, we will discuss the benefits and limitations of homogeneous and heterogeneous catalysts in the reaction producing biodiesel.
Biomass is carbon-based and is composed of a mixture of organic molecules containing hydrogen, an abundance of oxygen, nitrogen, and small quantities of other atoms including alkali, alkaline earth, and heavy metals.
Oils and lipids, fatty acids and fatty acid derivatives, from the biomass composition, are the standard components needed to produce biodiesel. The typical sequence of producing biodiesel from biomass is depicted in Figure 3. 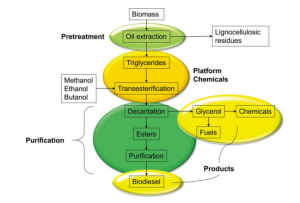 As shown in Figure 3, the biomass must undergo pretreatment as the first step where the oils and lipids are extracted from the selected biomass.
The method of pyrolysis, which is extreme heating without the presence of oxygen, is an effective way to obtain bio-oil from biomass.
The specifications to increase the selectivity of the desired bio-oil product are temperatures in the range of 450–700 °C, higher heating rates (1–200 °C/s), and very short retention times of around 20 seconds.
In addition, the use of a heterogeneous catalyst during this step increases the hydrocarbon content and decreases viscosity, acid value, and oxygenated compounds in the bio-oil which are all beneficial properties of the end biodiesel product. The undesired products are biochar and syngas produced when lower heating temperatures and higher heating temperatures are used respectively.
The bio-oil produced from biomass pyrolysis is a complex compound mixture containing alkenes, aromatics, phenolics, guaiacols, furans, esters, aldehydes, ketones, alcohols, sugars, and acids, with 35–40% oxygen content. Research has been performed to potentially use bio-oil as a fuel source so no more energy needs to be invested for further decomposition. However, since a catalyst in the reaction with a bio-oil has an increased risk of deactivation by coking, the process of a carbonaceous (coke) material being deposited on the surface of a catalyst, due to its high oxygen content, catalyst regeneration steps are required which cause an additional cost and units.
The next major decomposition step in the biomass to biodiesel production process is a transesterification reaction. The transesterification reaction features alcohol (e.g., methanol, ethanol, and butanol) and bio-oil (e.g., triglyceride).
In the presence of a catalyst, the resulting product is a mixture of fatty acids esters and glycerols as shown in Figure 4.

Introducing a catalyst to the transesterification process for biodiesel production increases the rate of the reaction, thus increasing the yield of the products. The effectiveness of specific variations of different catalysts will be discussed in detail in a subsequent section. After a decantation or centrifugation step, the fatty acid esters are separated from the other products, such as glycerol.
A neutralisation reaction and vacuum filtration are performed to purify the fatty acid esters to result in biodiesel fuel.
The long alkane chain of the biodiesel resembles the structure of typical petroleum-based diesel which allows biodiesel to perform similar functions in practice.
The selection of a certain catalyst for each unique application is often done based on an underlying purpose of the process and the following questions should be considered: do you wish for the highest conversion? Do you want a stable catalyst? Do you wish for a faster reaction time?
As far as the catalyst used for biomass conversion, homogeneous and heterogeneous catalysts are the two main types. Homogeneous catalysts, where the active sites are in the same phase as the reactants, can react very fast with the substrates and provide a good conversion rate per molecule of the catalyst.
Homogeneous catalysts can be further classified as base catalysts or acid catalysts. Base catalysts, alkali hydroxides like NaOH and KOH, show high catalytic activity during transesterification. In base-catalyzed transesterification, water is formed by the CH3OX (X = alkali metal) solution because of the interaction between XOH and present alcohol. The presence of water and fatty acids esters leads to soap formation by hydrolysis of the triglycerides, which reduces the biodiesel yield and affects the quality of biodiesel.
An acid catalyst, Brønsted acids such as HCl and H2SO4, can also catalyze the transesterification process, but the reaction is often significantly slower than that of the base catalysts thus resulting in extra energy usage.
For the synergetic effect, a combination of the two types of homogenous catalysts (acid first then base) is recommended. The two-step process achieves 99.3% biodiesel yield under optimum conditions.
The main drawback of homogeneous catalysts is the separation of the homogenous catalysts from the mixture. Attempting to separate the catalyst out of the mixture is a complicated and expensive process that virtually makes the full removal impossible.
On the other hand, heterogeneous catalysts can reduce the efforts of separation process. In general, chemical reaction occurs on the heterogeneous catalyst surface. The solid-liquid (two-phase) system allows for the recovery and reuse of heterogeneous catalysts. Another advantage of heterogeneous catalysts is that most are inexpensive, with the exception of the platinum group metals, thus minimizing the processing cost of biodiesel.
Similar to homogeneous catalysts, heterogeneous catalysts can also be classified into acid catalysts and base catalysts. Base catalysts have shown a higher catalytic activity than that of acid catalysts. Metal oxides, such as the commonly used CaO, are used for biodiesel production due to their long catalyst life, high basic strength, high activity, low solubility in alcohols, and reusability. 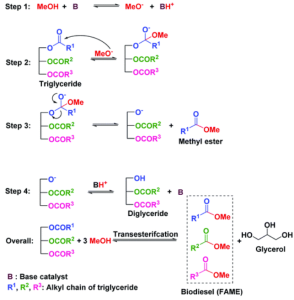 Doping the metal oxides or synthesising the solids’ structure in a specific way can increase catalytic activity. A fault of Heterogeneous catalysts for biodiesel production is that the catalyst will eventually undergo leaching, the loss of active species from the solid that is transferred into the liquid medium, of the active sites, leading to the eventual deactivation of the catalyst.
To highlight some of the most effective methods in the production of biodiesel, the transesterification reaction over heterogeneous and homogeneous catalysts will be evaluated: Base-catalysed reaction and. A typical solid base catalytic reaction mechanism is described in Figure 5.
First, the surface of the catalyst extracts H+ from the alcohol (i.e., MeOH) to form surface methoxide (CH3O−) and a surface proton.
Methoxide is a strong base and has high catalytic activity in the transesterification reaction. In the second step, the carbonyl group of the triglyceride molecule interacts with a methoxide anion, which further decomposes, in the third step, to a tetrahedral intermediate and methyl ester (or biodiesel).
In the fourth step, diglyceride is produced in addition to the original form of base catalyst through the interaction between the tetrahedral intermediate and surface H+. The reaction proceeds by decomposing diglyceride into monoglyceride and finally glycerol. Each triglyceride conversion step forms an ester thus, one molecule of triglyceride produces three ester molecules.
The two-step approach, involving pre-esterification followed by transesterification, can result in a much higher yield of biodiesel, especially if the biomass has an excess of free fatty acids.
As previously mentioned, the formation of soap during a homogenous base catalytic transesterification reaction is common and this can be attributed to high free fatty acid content.
Therefore, this two-step approach is utilized to combat this issue. The first esterification reaction uses a homogeneous acid catalyst that converts the free fatty acids to esters. The transesterification reaction, using a homogenous base catalyst, can proceed without any interference or side reactions to convert the triglycerides into biodiesel. This two-step process can be visualized in Figure 6. 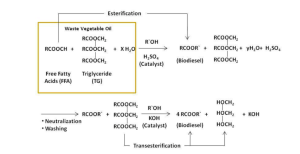 Studies show that catalyst properties play a pivotal role in the biodiesel production process. The premier reaction of the process is the transesterification reaction which shows a trend that the basicity of the catalyst is directly proportional to the transesterification activity. In addition to the basicity and acidity of the catalyst, the catalytic activity of a heterogeneous catalyst depends on its surface area, pore size distribution, and the size of surface species.
It has been studied and shown that the high surface area of the catalyst enhances the rate of biodiesel production. New state-of-the-art catalysts will continue to be developed and thus improving the efficiency and selectivity of the biofuel production process.
There is a multitude of ways to catalytically convert biomass into biofuels. Among the several procedures, the heterogeneous solid base-catalyzed reaction and two-step homogenous catalytic biodiesel production show the most promising ways to produce a high yield of biodiesel products.
The continued demand for fuels has piloted continued research on biodiesel production. Continued exploration into converting lignocellulosic biomass is the next necessary step for the industry to fully optimise the process. Knowing all we know about the catalytic conversion of biomass into biodiesel it is possible to form a near-flawless process yielding not only a sufficient fuel but also be more beneficial to the environment.