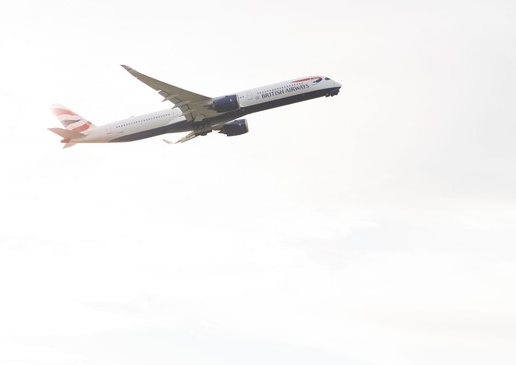 The first British Airways flight back to the US after 18 months was powered by a 35% blend of sustainable aviation fuel (SAF).
It is believed to be the first commercial transatlantic flight to be operated with such a level of the fuel blended with traditional jet fuel.
The Airbus A350 left for New York in a synchronised take-off with Virgin Atlantic.
British Airways flight BA001 became the airline’s first flight to depart for the US as the country lifted restrictions imposed on British travellers for more than 18 months.
The British Airways A350 flight was directly powered SAF provided by bp and made from used cooking oil.
The airline’s newest and most fuel-efficient long-haul A350 aircraft are up to 40% more efficient than the Boeing 747-400 Jumbo Jet aircraft that used to operate between London and New York.
Combining this modern aircraft efficiency with today’s blend of SAF means the flight’s overall CO2 emissions are more than 50 per cent less than those emitted by the now retired 747 aircraft that previously operated on this route.
UK Ambassador to the US, Dame Karen Pierce, said: “Today is an incredibly exciting and meaningful day for the UK-US relationship. We can all once again travel to each other’s countries to visit families, take holidays, and conduct transatlantic business. I am absolutely thrilled that safe and sustainable travel can fully resume between the UK and the United States.”
British Airways’ Chairman and CEO Sean Doyle, who travelled on the BA001, said: “Today is about celebrating the UK-US reopening of the transatlantic corridor after more than 600 days of separation, and it was fantastic to be able to mark this by synchronising the take-off of British Airways and Virgin Atlantic flights for the first time ever.”
Don't forget our world-leading Biofuels International Conference and Expo takes place in Brussels on March 15-16 with some great speakers participating. For more information go to https://biofuels-news.com/conference/