All-Gas enters next phase of biogas from algae project 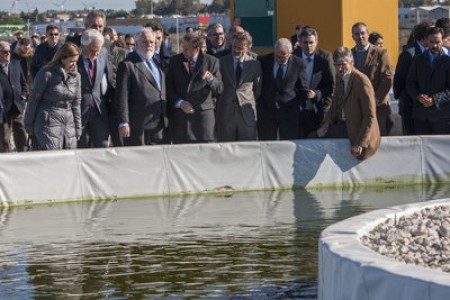 Miguel Arias Cañete, the European Union Commissioner for Energy and Climate Action, has inaugurated the new phase in the All-Gas project in the El Torno treatment plant in Chiclana, Cadiz.

Co-financed by the European Commission with the Seventh Framework Programme, the All-Gas Project aims to demonstrate the large scale production of biofuels and biogas based on the cultivation of low cost algae.

The All-Gas Project has now started its demonstration phase, successfully exceeding all the objectives and stages set from the start, producing quality biogas that is being tested in various vehicles to check their function.

According to a statement, the results of all the project’s phases so far have demonstrated that All-Gas is a clear example of circular economy since waste (dirty water) is converted sustainably into raw materials with added value, thus providing an innovative and environment-friendly process.

Speaking at the event, Cañete discussed the importance of looking into alternative fuels with lower greenhouse gas emissions.

“We are aware that they are complex projects because they involve various companies but once the process has started, decarbonisation in the European Union is now unstoppable.”

“The transport sector is key to this process,” he continued, pointing out that emissions from transport had increased by 33% between 1990 and 2016.

As well as Cañete, the event was attended by Councillor for the Environment and Land Planning of the Government of Andalusia, José Fiscal, the Deputy Central Government Representative in Cadiz, Agustín Muñoz, and the Mayor of Chiclana, José María Román, together with other representatives of the authorities. Aqualia was represented by Félix Parra, General Director, and Frank Rogalla, R&D Director.