Biofuels to power Qantas’ flights between LA and Australia 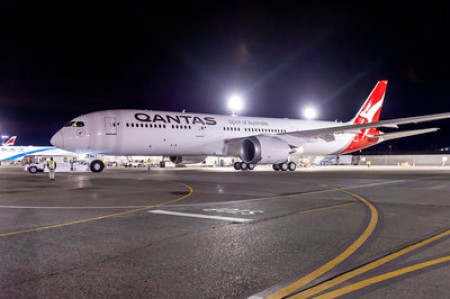 Qantas has announced that its Los Angeles based aircraft will be powered by biofuels from 2020, in a bid to reduce the airline’s carbon emissions on its US to Australia services.

Over the next ten years, Qantas will purchase eight million gallons (30 million litres) of renewable jet fuel each year from US based biofuel producer SG Preston. The fuels will be used in flights from Los Angeles Airport (LAX) to Australia.

The fuel from SG Preston consists of 50% renewable jet fuel produced from non-food plant oils, blended with 50% traditional jet fuel. Compared to standard jet fuel, the biofuel emits half the amount of carbon emissions per gallon over its life cycle.

According to Qantas, the commercial biofuel agreement is the first of its kind in Australian aviation history.

“The partnership with SG Preston is part of our commitment to lowering carbon emissions across our operations and sees us becoming the first Australian airline to use renewable jet fuel on an ongoing basis,” said Gareth Evans, CEO of Qantas International and Freight.

“As an airline group we are constantly looking for ways to become more fuel efficient and embrace new technologies and this partnership is a significant step on that journey.”

“Our agreement with SG Preston allows us to secure a supply for our Los Angeles based aircraft where we have a large fuel demand and where the biofuel industry is more advanced.”

Evans continued: “Through our biofuel programme we are also exploring renewable jet fuel opportunities in Australia and continue to work with suppliers to develop locally produced biofuels for aviation use.”

Randy Delbert LeTang, CEO of SG Preston, said: “Qantas is showing great leadership in its commitment to biofuels. We look forward to providing a high-performances renewable fuel for one of the most important routes on their international network.”

The International Air Transport Association (IATA), has reacted positively to the news.

“IATA congratulates Qantas and SG Preston on this landmark agreement, being the first commercial biofuel offtake for an Australian airline.

“Deals such as these are critical to the development of an aviation biofuel sector globally and the achievement of the aviation industry’s climate goals.”

According to a statement announcing the biofuels switch, SG Preston’s biofuel is produced from renewable plant oils which do not compete with food production. These fuels meet Qantas’ “stringent” sustainability certification requirements.

Qantas Group carried out a series of successful biofuel trial flights in 2012.