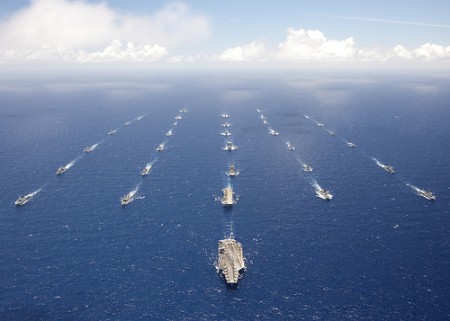 US navy aircraft carrier John C. Stennis Strike Group (JCSSG) and 26 nations will participate in the world's largest international maritime exercise for the 25th annual Rim of the Pacific (RIMPAC) in and around the Hawaiian Islands and Southern California using 11.2 million gallons of a 10% alternative fuel blend.

The alternative fuel that will be used during RIMPAC is derived from waste beef fat from the Midwest.

Alternative fuels can be made from animal waste oil, algae, or non-food crops. The fuel must be “drop-in,” requiring no modifications to engines or procedures. Having alternative fuel in the supply chain increases operational flexibility by allowing forces to obtain fuel from more sources worldwide.

This is the same fuel used earlier this year by JCSSG, during the first operational deployment of a Great Green Fleet (GGF) strike group. The principles behind the GGF initiative direct the use of energy efficiency measures, to include technologies and operational procedures, and alternative fuel in the course of normal operations.

The exercise met one of Secretary of the Navy Ray Mabus’ five energy goals, to demonstrate a Green Strike Group operating on alternative fuel.

US Navy ships and aircraft used 900,000 gallons of a 50-50 blend of renewable diesel and traditional petroleum as a proof of concept.

“The strike group has accomplished our mission in 7th Fleet, fulfilling a vital role in a region the U.S. Navy has operated in for a century and a half,” said Rear Adm. Marcus A. Hitchcock, JCSSG commander.

He added: “I am very proud of our sailors, and I look forward to watching them excel during the upcoming Rim of the Pacific exercise, when they have the opportunity to operate with maritime professionals from 26 different nations.”

According to JCSSG, RIMPAC provides a “unique training” opportunity that helps participants foster and sustain cooperative relationships that are critical to ensuring the safety of sea lanes and security on the world's oceans. The theme of RIMPAC 2016 is "Capable, Adaptive, Partners."

According to the Navy officials, 26 nations, 45 surface ships, 5 submarines, more than 200 aircraft and 25,000 personnel will participate in the biennial Rim of the Pacific Exercise. This year's exercise includes forces from Australia, Brunei, Canada, Chile, Colombia, Denmark, France, Germany, India, Indonesia, Italy, Japan, Malaysia, Mexico, Netherlands, New Zealand, Norway, People's Republic of China, Peru, the Republic of Korea, the Republic of the Philippines, Singapore, Thailand, Tonga, the UK and US.