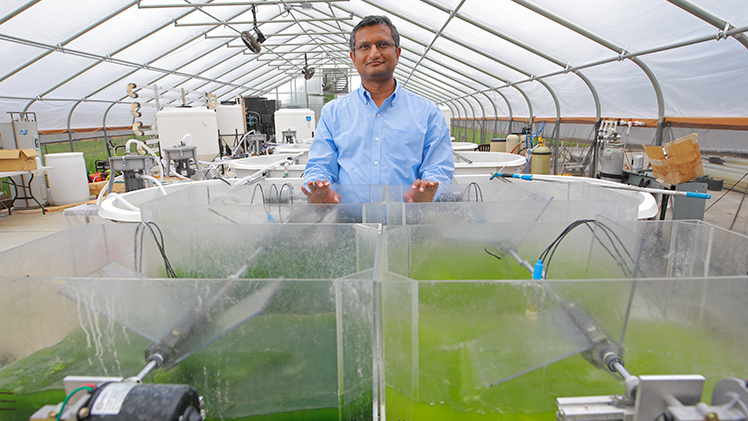 Dr Sridhar Viamajala, professor of chemical engineering at The University of Toledo, in the greenhouse where his team of researchers is growing algae to turn into biofuel
The University of Toledo (Utoledo) has received a $3.2 million (€2.7 million) grant to advance technology that speeds up the capture of CO2 from the atmosphere to grow algae, a critical part of the process of turning algae into biofuel.

UToledo’s grant forms part of a $34 million (€29 million) fund launched by the US Department of Energy’s (US DoE) Bioenergy Technologies Office to support 11 projects that will develop biomass resources to convert low-carbon fuel for planes and ships, lowering the transportation industry’s carbon footprint.

The award supports ongoing research by Dr Sridhar Viamajala, professor of chemical engineering, to speed up the production of microalgae using a farming technique called direct air capture, which minimises the loss of organic carbon, an issue that slows down algae production.

“This direct air capture process uses alkaliphilic algae that like to grow in high alkaline waters, which have a pH level above 10,” said Viamajala. “Water is normally neutral at a pH of seven.

“Because of their adaptation to these extreme environments, the alkaliphilic algae are protected from predators and other competing and contaminating organisms.”

Oils and carbohydrates produced by the algae, which use sunlight and nutrients to grow, can be turned into fuels and commodity goods such as plastics – products otherwise produced from petroleum.

“This technology improved sustainability by removing CO2 while simultaneously creating pathways for the displacement of petroleum,” added Viamajala.

US Representative Marcy Kaptur said: “The University of Toledo is a nationally recognised leader in the research of biofuel energies and environmental resilience. This vital partnership is recognition of the important role the University of Toledo plays and will help advance the critical technology breakthroughs necessary to power our cleaner, greener future.”

US DoE figures suggest transport accounts for around 30% of total US energy consumption and generates the largest share of the country’s greenhouse gas emissions.

“From food waste to yard trimmings, biomass technology is converting our everyday trash into low-carbon fuel for planes and ships while cutting costs and supporting our critical transportation sector,” commented Secretary of Energy Jennifer Granholm.

“The companies and universities leading these projects will ensure that our cutting-edge biofuel technologies reduce carbon emissions, creating new jobs up and down the supply chain and are made in the US by American workers.”

Dr Sridhar Viamajala, professor of chemical engineering at The University of Toledo, in the greenhouse where his team of researchers is growing algae to turn into biofuel