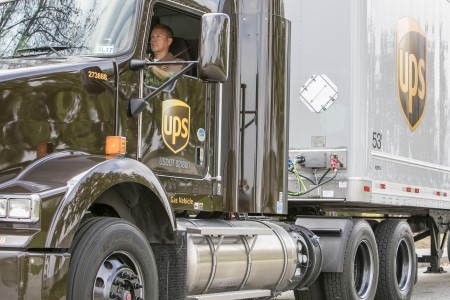 UPS has deepened its commitment to alternative fuels

UPS, a package delivery giant, has announced that it will invest more than $750 million (€670m) for its alternative fuel and advanced technology vehicles by the end of 2016.

It also announced that it has successfully completed one billion miles in its ‘rolling laboratory' fleet of electric, hybrid, natural gas, and biofuel-powered delivery vehicles.

The company announced these measures in its 14th annual Sustainability Report, released earlier this week.

“We had a big sustainability goal as we set out to make the most of our rolling laboratory by driving one billion clean miles in alternative fuel vehicles – that’s the equivalent of well over 4,000 trips to the moon,” said David Abney, chairman and CEO at UPS.

He added: “While attaining this goal is new, our commitment to seeking out alternative fuels actually dates back to the 1930s when UPS tested electric vehicles.

“With more than 100,000 drivers logging more than three billion miles per year, our future depends on our ability to meet the growing demand for global trade while reducing our impact on the environment.”

Reaching that goal one year early, around 12% of the conventional diesel and gasoline fuel previously used by UPS’s ground fleet is now being replaced by alternative fuels including renewable natural gas and renewable diesel.

In its report, UPS said it also increased its commitment to renewable fuels in 2015, with plans to purchase up to an additional 60 million gallons of renewable diesel and renewable natural gas (RNG) over the next several years.

UPS also acknowledged that its goals to increase the amount of biofuels used in its aviation crafts were not "going as fast as we expected" due to technological and marketplace factors.

He added: “Instead, it was ’What’s the best way to make alternative fuels work for UPS, and for the environment?’ After more than a decade of focus, we are now driving more than 1 million miles globally each business day in our alternative fuel and advanced technology fleet.”

Recognising alternative fuels and advanced technologies each have unique advantages depending on the routes and geographies in which they are used, UPS deploys the more than 7,200 vehicles in the Rolling Lab to determine what works best in each situation.

From old-fashioned pedal power and electric-assisted bicycles in dense urban areas like London and Hamburg to electric and hybrid electric vehicles in the US, and natural gas, renewable natural gas and propane globally, UPS said it is putting sustainability innovation into action, all over the world.

“Many congested cities around the world are implementing zero tailpipe emissions zones, and UPS is keeping ahead of the curve by investing in advanced technologies and creating the commercial delivery fleet of the future,” said Abney.

By the end of 2016, UPS will have invested more than $750 million in alternative fuel and advanced technology vehicles and fueling stations globally since 2009. That continued investment, combined with supportive government policies, and a collaborative set of partners has helped to expand development and utilization of alternative fuels, vehicles and infrastructure throughout the world.

UPS has deepened its commitment to alternative fuels