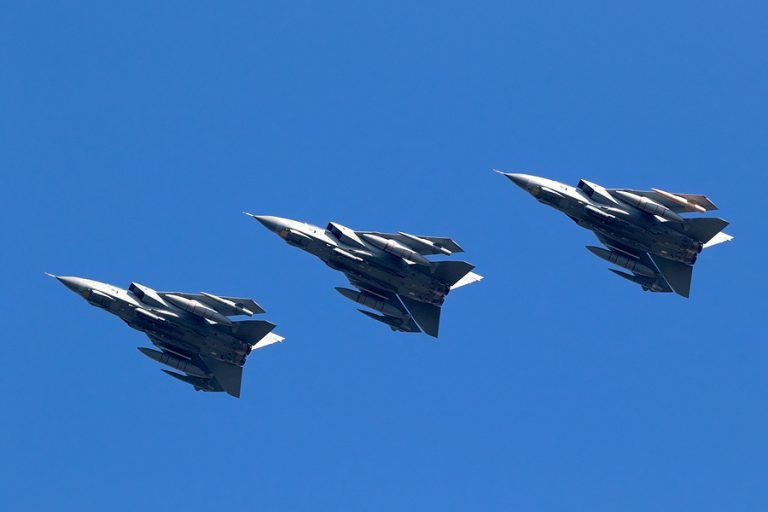 Major research into sustainable fuel that could revolutionise the Royal Air Force and eliminate its reliance on fossil fuels has reached a landmark new stage.
The research, carried out by the RAF in partnership with British firm Zero Petroleum, and focussed on using synthetic fuel technology, was announced at the Farnborough International Airshow.
It will provide crucial data to evidence the scalability and efficiency of the synthetic technology, which has the potential to revolutionise the RAF’s fuel while ensuring its capability remains cutting edge.
The Royal Air Force, having flown a world-record first 100% synthetic flight in November 2021, will move to the next phase producing more fuel for certification and testing. Design blueprints from this research will enable construction of squadron-scale fuel manufacturing capability as a next stage.
Defence Minister Jeremy Quin said: “The creativity and ingenuity of the RAF and UK industry, backed by our ring-fenced research and development funding, has resulted in ground-breaking new fuel technology. It has the potential to improve operational resilience while eliminating fossil carbon emissions in flight.”
Chief of the Air Staff, Air Chief Marshal Sir Mike Wigston said: “This ground-breaking collaboration with Zero Petroleum is a glimpse of the future for aviation fuel. It points to how we will crack the NetZero challenge as a national and international endeavour, and the leading role the Royal Air Force and UK science and technology can play in that. Zero Petroleum’s synthetic fuel is manufactured by extracting hydrogen from water and carbon from atmospheric carbon dioxide. Using energy generated from renewable sources like wind or solar, these are combined to create the ‘drop-in’ synthetic fuel.”
Paddy Lowe, founder of Zero Petroleum, said: “The RAF’s vision for fossil-free flight using synthetic fuels is matched by Zero Petroleum’s commitment and enthusiasm to deliver the solution using unique British technology. Together we showed what was possible with our record-breaking demonstration flight in 2021.
“We are incredibly excited to start now on the important development of this technology to production-readiness in advance of deployment at scale to flight operations. We could not wish for a better partner than the RAF which has been a pioneer throughout its 100+ years of existence.”