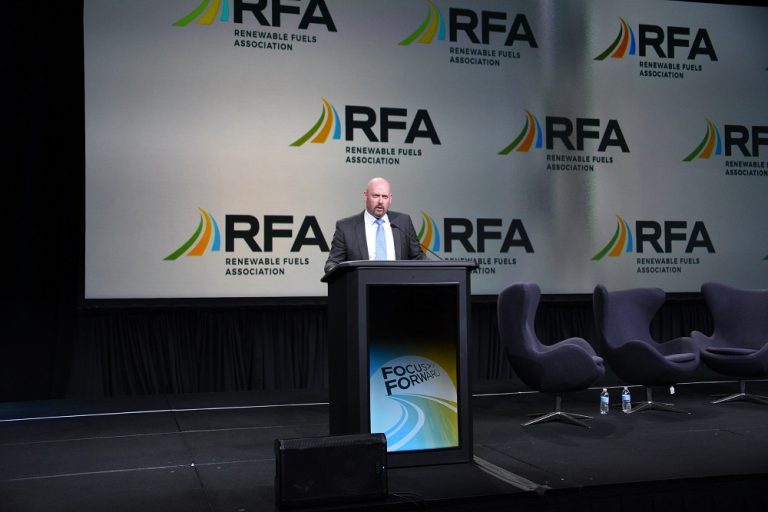 RFA's Geoff Cooper
The Renewable Fuels Association has called on President Trump to reject attempts to grant the oil industry more waivers from renewable fuel obligations.
The letter coincided with the President’s anniversary visit at an Iowa ethanol plant last year.
“One year ago today, you visited Southwest Iowa Renewable Energy in Council Bluffs to join us in celebrating a monumental achievement,” wrote RFA President and CEO Geoff Cooper.
“At your direction, EPA had just completed regulatory changes finally allowing year-round sales of gasoline containing 15% ethanol - called E15. But E15 growth would have been exponentially larger if not for your EPA continuing to excuse oil refiners from their legal obligations to blend renewable fuels.
“As we told you a year ago, EPA’s refinery waivers have caused devastating demand losses for ethanol and corn, and they undermine the expansion of E15.”
Cooper also described the impact of more recent crises, such as the Saudi-Russia oil price war that decimated fuel costs and the COVID-19 pandemic.
“Mr President, we need your help,” he concluded. “We ask that you stand up for the Renewable Fuel Standard. Please direct your EPA to abide by the January court ruling and end the abuse of the refinery waiver loophole. You stood by us, farmers, and consumers when you directed EPA to allow year-round E15.
“Now, we humbly ask that you stand with us again and ensure ethanol demand is not eroded by illegal refinery waivers.”