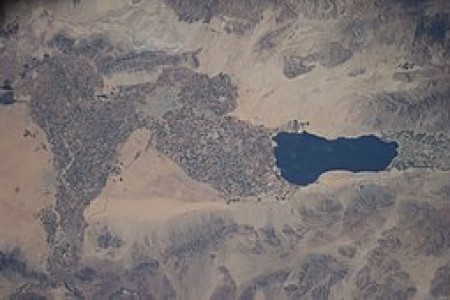 Scientists from Sandia National Laboratories are working to see if one of California’s most polluted lakes can be turned into a profitable source of algae biofuel.

The 350-square-mile Salton Sea in Southern California has elevated levels of nitrogen and phosphorus due to agricultural runoff. Algae thrives in these conditions, something which causes a host of environmental problems. The team from Sandia are now looking to harness this algae both to provide a new biofuel source, and clean the lake of pollutants.

Key to their solution is algae’s prolific, exponential growth, and Sandia-Labs patented fermentation process. The scientists from Sandia, with funding from BETO, hope that the Salton Sea Biomass Remediation (SABRE) project will help determine whether algae biofuels can play a key role in solving the US’ diverse energy needs.

Just a few months into the research, Sandia biochemist Ryan Davis is optimistic about the prospects. “The early results we’re already getting from the Salton Sea appear to be superior to results from similar algae systems. It’s really promising,” he said in a statement.

The first phase of the project saw Sandia scientists test a new method for producing algae, called an ‘Alga Turf Scrubber’ floway system, which is used to grow a collection of native algae species. The system pulses water from the lake in waves across a sloped floway. The algae consume the nutrients, meaning clean water is then released out the other side.

Low maintenance, solar powered pumps designed by Sandia power the system, while periodic farming of the algae can be done using farming equipment, according to a statement. Early results from testing in Texas suggest turf scrubbers can produce a quantity of algae comparable to the popular raceway form of algae cultivation.

By producing algae native local to the area, the new system is more resistant to pathogens and predators. Meanwhile, it also helps address the main criticism of algae as a biofuel source – that it uses too much water.

“There’s water and then there’s water,” Davis said. “We’ve shown that we can grow algae in turf scrubber systems using water full of nasty components. And it still thrives.” In other words, there isn’t much that can be done with this water until the pollutants are removed.

In an ironic twist, the team from Sandia hope that the SABRE algae growing project could actually help manage harmful, unchecked algae growth.

Algae blooms covering the surface of the Salton Sea cause a host of environmental problems, most notably in the thousands of asphyxiated, dead fish found on the banks of the lake each year. Causing significant ecological damage, these algae blooms have even been connected to the death of sea birds in the area.

The SABRE project has seen Sandia construct a turf scrubber on one of the main tributaries feeding the Salton Sea. The team have found that the algae growing inside the turf scrubber feed on and remove the chemicals in the water as it passes through. Sandia hopes that in doing so, a significant amount of the chemicals responsible for algae growth will be removed.