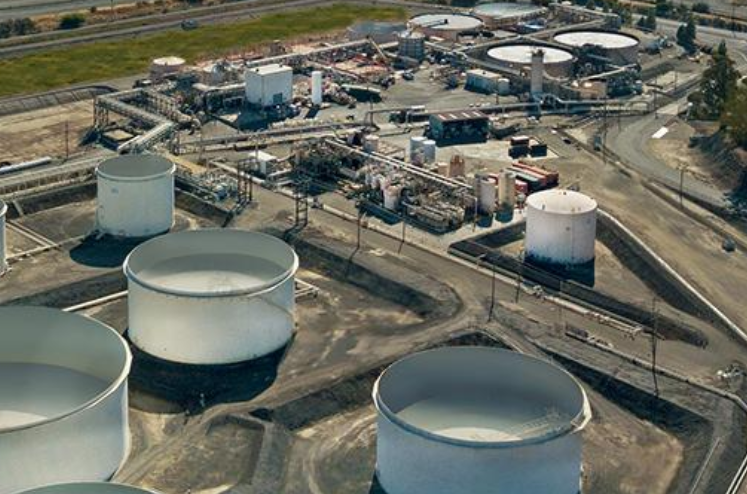 An aerial view of the plant
Energy manufacturing and logistics company Phillips 66 plans to reconfigure its San Francisco refinery to produce renewable fuels.
The plant, in Rodeo, will no longer produce fuels from crude oil, but instead will make fuels from used cooking oil, fats, greases and soybean oils.
The Phillips 66 Rodeo Renewed project will produce 680 million gallons annually of renewable diesel, renewable gasoline and sustainable jet fuel.
Combined with the production of renewable fuels from an existing project in development, the plant will produce greater than 800 million gallons a year of renewable fuels, making it the world’s largest facility of its kind.
The project includes the construction of pre-treatment units and the repurposing of existing hydrocracking units to enable production of renewable fuels.
The plant will utilise its flexible logistics infrastructure to bring in cooking oil, fats, greases and soybean oils from global sources and supply renewable fuels to the US market.
“Phillips 66 is taking a significant step with RodeoRenewed to support demand for renewable fuels and help California meet its low carbon objectives,” said Greg Garland, chairman and CEO of Phillips 66.
“We believe the world will require a mix of fuels to meet the growing need for affordable energy, and the renewable fuels from RodeoRenewed will be an important part of that mix. This project is a great example of how Phillips 66 is making investments in the energy transition that will create long term value for our shareholders.”
Renewable fuels production is expected to begin in early 2024. Once reconfigured, the plant will no longer transport or process crude oil.
The plant is expected to employ more than 400 jobs and up to 500 construction jobs. Phillips 66 also announced plans to shut down the Rodeo Carbon Plant and Santa Maria refining facility in Arroyo Grande, California, in 2023. Associated crude oil pipelines will be taken out of service in phases starting in 2023.

An aerial view of the plant