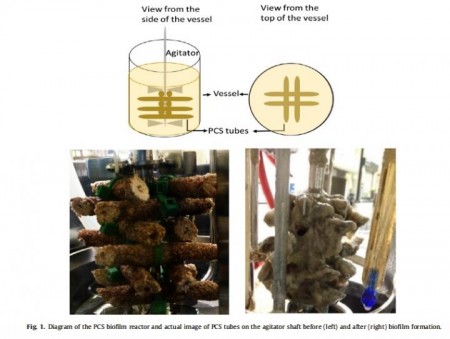 This is a biofilm reactor tube. Researchers evaluated biofilm formation on the plastic composite supports in the bioreactor. They discovered that when mold and yeast are allowed to form a biofilm, hyphae of the mold provide surface area for the yeasts' attachment, improving ethanol production. Credit, Dimerci Lab

Researchers in Pennsylvania have developed a new method for converting potato waste into ethanol, a process they claim could reduce production costs for biofuels in the future and provide extra value for chip makers.

The team from the Penn State University’s College of Agricultural Sciences used potato mash made from the peelings and potato residuals from a Pennsylvania food-processor to trigger simultaneous saccharification (the process of breaking down the complex carbohydrate starch into simple sugars) and fermentation (where sugars are converted to ethanol by yeasts or other microorganisms in bioreactors.)

Adding mold and yeast -- Aspergillus niger and Saccharomyces cerevisiae, respectively – to the bioreactor catalysed the conversion of the potato waste into bioethanol. The reactor had plastic composite supports to encourage and enhance biofilm formation and increase the microbial population.

Biofilms are a natural way of immobilising microbial cells on a solid support material. Microbial cells are abundant and more resistant to environmental stress when in a biofilm, resulting in higher productivities. These biofilm benefits were especially beneficial to the researchers’ application as the mold enzyme activity required higher temperature and the yeast had to tolerate this.

The optimal conditions for a biofilm reactor were found to be 95 degrees Fahrenheit, and a pH of 5.8 with no aeration.

After 72 hours, the researchers achieved a maximum ethanol concentration of 37.93 grams per litre. The yield was 0.41 grams or ethanol per gram of starch.

"These results are promising, because the co-culture biofilm reactor provided similar ethanol production -- 37.93 grams per leader -- compared to the conventional ethanol production -- 37.05 grams per liter -- which required pre-treatment with added commercial enzymes at a higher temperature," Ali Demirci, professor of agricultural and biological engineering at Penn State and the study leader, said.

Gulten Izmirlioglu, a doctoral student in agricultural and biological engineering when the study was conducted, believes the findings, which show plastic composite supports can be used for simultaneous saccharification and fermentation processes in biofilm reactors with co-cultures when producing ethanol, could be significant for industry.

"Overall, bioethanol production from starchy industrial wastes can be improved with application of biofilm reactors, while the production cost is reduced with integrations of the simultaneous saccharification and fermentation process and co-culturing," she said.

The research has been published in the journal Fuel.

This is a biofilm reactor tube. Researchers evaluated biofilm formation on the plastic composite supports in the bioreactor. They discovered that when mold and yeast are allowed to form a biofilm, hyphae of the mold provide surface area for the yeasts' attachment, improving ethanol production. Credit, Dimerci Lab