Cheers to HVO as pub celebrates one year of renewable heating 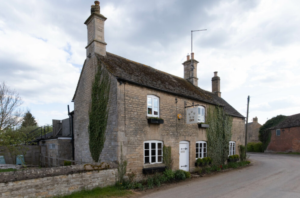 A pub in south Lincolnshire in the UK has celebrated one year of net-zero emissions by using hydrotreated vegetable oil (HVO).
The Five Horseshoes Inn in Barholm village first adopted the renewable liquid fuel in summer 2021. The 300 year old pub has since become what is believed to be the first rural establishment in the country to achieve carbon neutral status.
HVO can be used in an existing oil heating system as a replacement for kerosene following a minor modification to the boiler. The Five Horseshoes Inn, however, decided to replace its 1970s traditional oil fired boiler with a new modulating model to maximise its carbon savings.
Landlady Emma Freeman commented: “It’s wonderful to be celebrating a year since we switched to HVO at The Five Horseshoes Inn and continue to play our part in tackling climate change by reducing carbon emissions.
“The transition to HVO was very straight forward and the past year has gone very smoothly. The fuel combined with our new, energy-efficient boiler works so much better than before and we often forget that we’re no longer using kerosene. For pubs like us, this hassle-free low-cost solution to going green will be a real lifesaver.”
The pub’s transition to HVO is part of a wider demonstration of nearly 150 other homes and businesses by trade associations OFTEC and UKIFDA. The project showcases the viability of the fuel as an affordable and realistic green heating solution for rural properties in support of the government’s target to achieve net-zero emissions in the UK by 2050.
Malcolm Farrow from OFTEC, which is funding the cost of the HVO used in the pub as part of the demonstration project, said: “We are delighted to hear that The Five Horseshoes Inn has had a successful first year on HVO. The transition has had a huge positive impact on the local community by providing a future-proof solution for the pub and helped enable them to reach their ambitious goal of achieving net-zero emissions.”
The rural pub’s transition to HVO was supported by St Neots based EOGB Energy products, which replaced the pub’s old 1970s boiler with a state-of-the-art modulating boiler to deliver even greater efficiency. The EOGB team also installed smart controls including thermostatic radiator valves, occupancy sensors and apps for remote access to support the establishment’s flexible heating needs.
For more information visit futurereadyfuel.info.

Bioethanol News
Teeside partners with Air France-KLM to boost SAF supply
Teesside has become the UK’s first airport to partner with Air France-KLM for the airline’s programme to boost the use of Sustainable Aviation Fuel (SAF). KLM Royal Dutch Airlines, part of the Air France-KLM group, connects passengers worldwide from Teesside to more than 160 countries via its link to the global Amsterdam Schiphol hub. Air France and KLM are now working... [Read More]
Bioethanol News
Changi Airport to explore renewable fuel options
Changi Airport in Singapore has launched a tender for consultants to help develop an offtake mechanism for renewable fuels going forward. This follows a pilot test last year on the use of sustainable aviation fuel (SAF) at the international hub by the Civil Aviation Authority of Singapore (CAAS). The move follows the authority’s desire to boost Singapore’s competitiveness... [Read More]
Biodiesel News
Feedstock filtration success
To reduce our reliance on fossil fuels and work towards sustainability, the European Commission has introduced the Fit-for-55 package. This is a set of European policies implemented to help the transition of Europe to climate neutrality by 2050. These policies aim to reduce Europe’s greenhouse emissions by at least 55%, as well as strengthen European partnership and... [Read More]
Policy News
bp Energy Outlook highlights biofuels as one growth sector
This year’s bp Energy Outlook explores the key trends and uncertainties surrounding the energy transition out to 2050. Among those trends in the report is the use of modern biofuels - modern solid biomass, biofuels and biomethane - which the company said was growing rapidly and was helping to decarbonise hard-to-abate sectors and processes. The three main scenarios... [Read More]
Features
Biofuels’ driving forces in 2023 – Energy security, emissions and costs
Jeremy Moorhouse, Renewable Energy Analyst, International Energy Agency, outlines what the year ahead holds for the biofuels industry. Following Russia’s invasion of Ukraine, policymakers around the world are evaluating whether biofuels can help balance three competing priorities: energy security, greenhouse gas reductions and affordable energy supplies. Last year,... [Read More]
Biodiesel News
Plenty of biofuels legislation coming to a town near you in 2023
Angel Alvarez Alberdi, the secretary general of the European Waste-based and Advanced Biofuels Association (EWABA), outlines what he feels are the critical issues affecting the industry this year. This year will be yet another year of heavy regulatory activity for the EU biofuels industry, with many different key laws being passed as the year progresses. We briefly discuss... [Read More]
Biodiesel News
Imperial approves largest renewable diesel facility in Canada
Imperial will help Canada achieve its net-zero goals by investing about $560 million (€514 million) to move forward with construction of the largest renewable diesel facility in the country. The project at Imperial’s Strathcona refinery near Edmonton is expected to produce more than 1 billion litres of renewable diesel annually primarily from locally sourced feedstocks. This... [Read More]
Biodiesel News
Major equipment manufacturers and fleets on the move with clean fuels
Diesel engine and equipment manufacturers Caterpillar, John Deere and Cummins joined PepsiCo and Florida Power & Light to discuss the important role that low-carbon liquid fuels like biodiesel and renewable diesel play in helping them achieve corporate sustainability goals. Joining the panel of experts at the Clean Fuels Conference in Tampa included Joel Feucht,... [Read More]
Biodiesel News
Topsoe enters agreement with Steeper Energy for waste-to-biofuel solution
Topsoe has signed a global licensing agreement for a complete waste-to-fuel solution to boost sustainable aviation fuel production (SAF). The agreement with Steeper Energy, a pioneer within biomass conversion technologies, combines Topsoe’s technologies in renewable fuels and hydrogen production. With the agreement, Topsoe will be able to provide a complete waste-to-fuel... [Read More]
Bioethanol News
Lenovo teams up with Kuehne+Nagel to help fund SAF solutions
Lenovo is joining forces with Kuehne+Nagel to create a first-of-its-kind logistics service in the technology industry. Through a purchase add-on, customers will be able to buy credits to reduce the carbon footprint associated with the shipping of IT equipment and devices. They will have the opportunity to use these credits to fund the use of sustainable aviation fuel... [Read More]