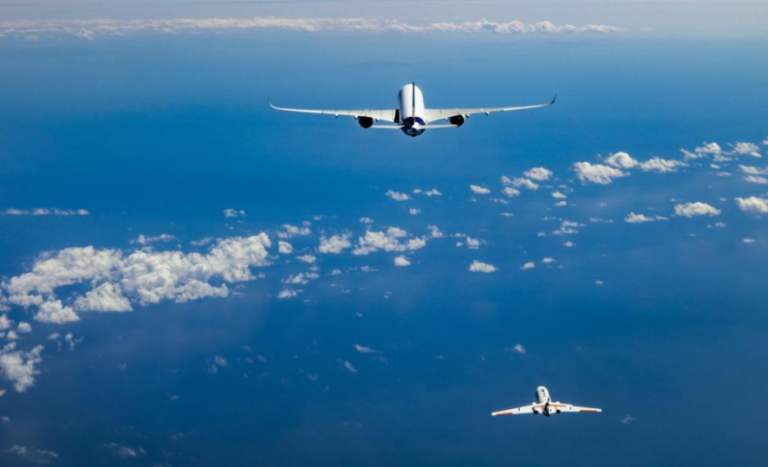 The latest test flight of an Airbus A350 operating on 100% sustainable aviation fuel (SAF) mobilised a Falcon 20E to capture and analyse in-flight data.
Flying within 100 metres during the test campaign, the two aircraft delivered invaluable insight with the preliminary observations pointing to the positive impact of SAF on aircraft emissions.
The smaller aircraft took up its position just behind the A350 with the smaller companion mirroring its every move, getting as close as 100 metres away.
The aerial two-step continued for about three hours, as the two aircraft weaved in and out of the clouds above Nice, Marseille and Corsica.
After, the A350 touched down in Toulouse, France, the test flight was deemed complete as part of the Emission and Climate Impact of Alternative Fuels (ECLIF3) project led by Airbus, together with Rolls-Royce, DLR, Neste, the UK’s.
The chase aircraft is an aircraft that follows an airborne subject to make real-time observations, capture images during flight or collect engineering data.
For the ECLIF3 project, DLR’s modified Dassault Falcon 20E-5 played the starring role as the chaser aircraft.
The DLR Falcon’s mission was to measure emissions from the A350 test aircraft powered by Rolls-Royce Trent XWB engines fuelled with 100% SAF.
“We can test the engines and the fuel system on the ground,” said Mark Lewis, an Airbus test pilot. “But to gather the emissions data necessary for this programme to be successful, there's only one way to do that and it’s to fly a real aircraft in real conditions.”