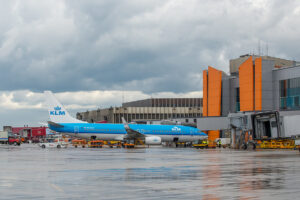 KLM and Transavia are increasing ticket prices by up to €12 this year to pay for the use of more sustainable aviation fuel (SAF).
The airlines took a first step in this direction early last year by blending half a percent of SAF for flights from Schiphol in the Netherlands.
That amount will be doubled this year, according to a spokesperson.
KLM said it is taking this step voluntarily, along with its subsidiary Transavia, to work toward the European commitment to blend at least 2% more sustainable fuel by 2025. Therefore, KLM is already taking an "important step" in its efforts to become more sustainable and also to advance the still-expensive SAF market.
The Dutch bank ABN AMRO calculated earlier this month that EU regulations on CO2 emissions will push airfares higher in the coming years. A higher air tax of about €26 per departing passenger has already been in effect since January 1.
According to airlines.de, the ticket price for economy class, which already includes the amount for "sustainable aviation fuel," will increase by between one and eight euros. In business class, on the other hand, passengers will have to pay up to €24 more in the future.
Schiphol announced that it will launch a trial to become more sustainable. Therefore, the airport will use battery systems instead of diesel generators to power aircraft on the ground.