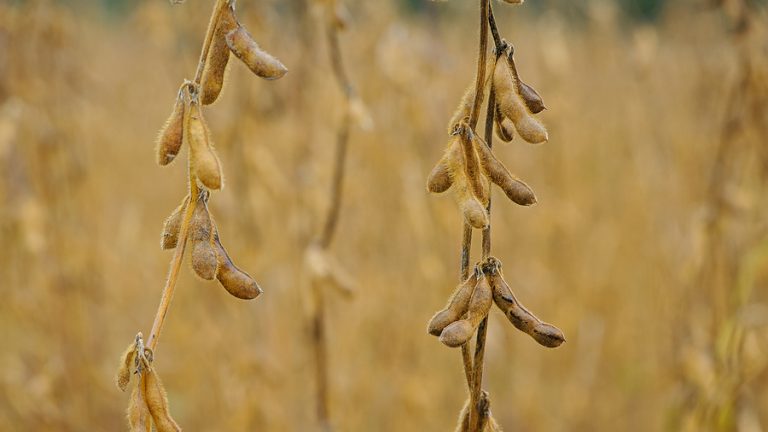 Scientists have developed a way to make a better sustainable aviation fuel from soybean oil.
The team from the Agricultural Research Service (ARS) in Peoria, Illinois, studied how fatty acids from soybean oil can be turned into an array of industrial products normally made from petroleum, including fuel, ink and paints.
One appeal of plant-based products is that they recycle carbon found in the atmosphere. This makes plants a far more renewable resource than petroleum and other fossil fuels, which add carbon to the atmosphere as they're extracted from the earth and used.
However, soy jet fuels developed to date contain insufficient amounts of "aromatic" compounds, which impart desirable density to fuel and help keep jet engine seals supple and working properly.
The current shortcoming of aromatic levels in soy jet fuel means less of it can be blended with conventional jet fuels derived from petroleum, explained Ken Doll, a research chemist with the ARS National Center for Agricultural Utilization Research in Peoria.
Blends using biofuels are one of the ways the aviation industry is working to reduce its "carbon footprint”, or total emissions of greenhouse gases, particularly carbon dioxide (which amounted to 905 million tons in 2018).
One approach to making soy jet fuel relies on the use of a precious metal called ruthenium to catalyze reactions that chemically modify the structure and properties of the oil's unsaturated fatty acids.
The problem with this approach is that it generates too few aromatic compounds, noted Doll, with the ARS center's Bio-oils Research Unit.
To get around the problem, he and fellow ARS scientists Bryan Moser and Gerhard Knothe replaced ruthenium with iridium as the chief catalyst in a six-step procedure that they devised and received a patent in November.
In laboratory-scale experiments, use of the approach on high oleic-acid soy oil produced jet fuel formulations containing 8 to 35% aromatics—a range compatible with conventional jet fuels and beyond what ruthenium-based methods can achieve.
The advance, which the team recently reported in an online issue of the International Journal of Sustainable Engineering, opens the door to increased blending of bio- and conventional- jet fuels as an emissions-cutting measure. The method also generates little or no naphthalene, a jet fuel component that emits soot upon combustion.
"We originally used soy oil because of its high quality, affordability and the refinery processes that exist. It's also a commodity that we've historically worked with in Peoria," Doll added. "But any oil that has significant oleic acid levels would work."
The Peoria team's efforts are also reflective of the U.S Department of Agriculture's participation in the Sustainable Aviation Fuels Grand Challenge together with other federal agencies and stakeholder groups. The challenge is a multi-faceted government-wide commitment to enabling the production of 35 billion gallons of sustainable aviation fuel per year by 2050, using "home-grown" and other renewable sources.