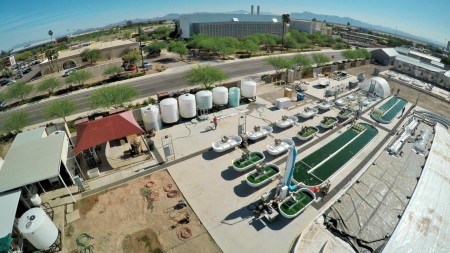 Scientists at the National Renewable Energy Laboratory (NREL) in Colorado are leading a project to improve how algae-based biofuels and bioproducts are made.

The US Department of Energy’s Bioenergy Technologies Office has announced its support for the project, titled: “Rewiring Algal Carbon Energetics for Renewables,” in the form of a $3.5 million (€2.98 million) grant. The funding is part of the federal bioenergy office’s Advanced Algal Systems Program, which has previously awarded $15 million in grants to three other projects.

According to the DOE, the overall project goal is to double the yield of biofuel precursors from algae to about 3,700 gallons per acre per year.

Strategies to be used by the team in their attempts to meet this goal include increasing algal cultivation productivity, optimising biomass composition, and extracting and separating different types of algal lipids to reduce the costs of upgrading them to renewable diesel.

"How can we get photosynthetic microorganisms - namely algae - to grow faster, and how can we do better at converting that biomass into fuel intermediates?" Ken Reardon, Colorado State University professor of chemical and biological engineering said. "There is a cost piece to it, but the absolute No. 1 target is productivity."

The researchers will use an algae species called Desmodesmus armatus, and will focus on fundamental processes of efficiently channelling carbon dioxide into useful fuel intermediates. A San Diego-based company called Sapphire Energy is a project partner and has pioneered the use of D. armatus for biofuels.

Graham Peers, an associate professor of biology at CSU, will lead algae strain development for the project, including developing tools to modify D. armatus to maximise its photosynthetic efficiency.

“I think the exciting thing about this project is the integration of scales, all the way from strain improvements in our labs to the translation of these changes in outdoor conditions," Peers said. "Our overall goal is to connect all the parts associated with biofuel production."

Other partners on the project will work on the algae-to-bioproduct life cycle, including modification of growing pond conditions, and separating algal solids from water to remove lipids.

"We're excited to leverage the strengths of all our partners on this important project," said project lead Lieve Laurens, senior scientist at the National Renewable Energy Laboratory. "From building on the work already done by Sapphire with the D. armatus strain to Arizona State University's manipulation of optimal outdoor conditions and Colorado State University's research to improve photosynthesis in the strain and fermentation of the sugars - each team member is playing an integral role."