Japanese airline to use SAF on domestic routes 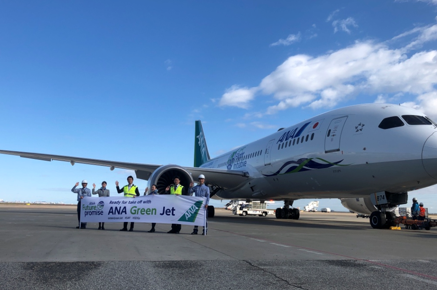 All Nippon Airways (ANA) has announced its second ‘green jet’ will enter service on regular scheduled domestic flights using sustainable aviation fuel (SAF).
This marks the first time ANA will use SAF produced by Neste on domestic flights.
"To be able to use mass-produced SAF for domestic flights is an exciting step toward reducing our carbon emissions and achieving our sustainability goals," said Shinichi Inoue, president and CEO of ANA. "In addition, with the use of the ANA Green Jet on domestic routes to raise awareness of SAF with our customers and the public, ANA hopes to be a leader in the industry and inspire others to follow suit."
The second ANA Green Jet began service on November 14 on the Tokyo Haneda-Fukuoka route.
The aircraft will feature the same technologies and services as the first ANA Green Jet that took flight for international routes on October 5.
In 2020, ANA became the first Japanese airline to enter into a mid-to-long-term procurement agreement with Neste .
Since then, ANA has regularly procured SAF from Neste, the world's leading producer of renewable diesel and sustainable aviation fuel, for use on scheduled international flights departing from Japan.
SAF produced by Neste is made from sustainably sourced, renewable waste and residue raw materials. Typically, in its neat form and over the lifecycle, it can reduce up to 90% of greenhouse gas emissions compared to fossil jet fuel.
The fuel gives an immediate solution for reducing the direct greenhouse gas emissions of flying. It can be used as a drop-in fuel with existing aircraft engines and airport infrastructure, requiring no extra investment.
The ANA Group has set a goal of replacing at least 10% of its jet fuel with SAF by FY2030 and of becoming carbon neutral by FY2050 and is taking a variety of measures to expand the use of SAF. As a leading airline in Japan, we will continue to proactively work to incorporate initiatives to reduce CO2 emissions and contribute to delivering solutions to environmental issues.