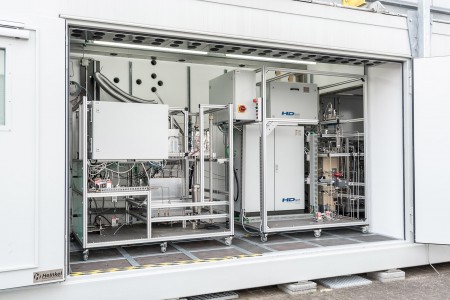 A technology to produce biofuel within ‘mobile production units’ has been developed by scientists from the Fraunhofer Institute for Microengineering and Microsystems (IMM).

12 research groups from the European Union’s Biogo project were involved in the development. The technology itself uses ingredients from local forests.

“Wood waste and tree bark are available in great quantities throughout Europe but, up to now, have all been ignored as a resource. That makes them an ideal raw material, as they don’t need to be specially cultivated and thus won’t compete with food production,” said Professor Gunther Kolb from Fraunhofer IMM in a press release.

“An important component of the Biogo concept is decentralised production. To achieve this, we have developed mobile production units that can be housed in containers and installed where they are needed.”

One of the prototype units is located behind Fraunhofer IMM, transforming wood industry waste into ‘high-quality’ fuel.

“The goal of the Biogo project was to develop a plant that could fit in a 40-foot container with standard dimensions of 12 x 3 x 3 meters, and that could accommodate all the procedural and processing steps,” continued Kolb.

“At the same time, we had to make the manufacturing process as environmentally-friendly and resource-efficient as possible. The challenge was to optimize the process so we would end up with a fuel that is chemically indistinguishable from standard gasoline.”

The first process stage of the production unit is heating the wood waste into a pyrolysis oil. Then, using reaction chambers developed by scientists at Fraunhofer IMM, the oil is converted into a synthetic gas. Extracting the oxygen from the gas results in a synthetic gasoline.

In coming years, according to the release, the Biogo teams are planning to further develop the plant, with the goal of producing as much as 1,000 litres of eco-fuel per day.

When asked over whether this could spell the end of larger filling stations, Kolb said, “That will depend on the political circumstances.”

“As long as the price of oil remains at its present level, the new technology won’t be able to compete. The key question will be whether we in Europe really want to move away from fossil raw materials and are prepared to exempt eco-fuels from taxation or subsidise their production.”