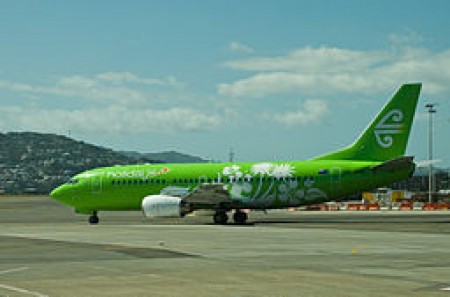 By Phillip Capper from Wellington, New Zealand [CC BY 2.0 (http://creativecommons.org/licenses/by/2.0)], via Wikimedia Commons

Several environmental groups have handed over a petition to the UN’s aviation body, ICAO, urging the agency to scrap its plan for the widespread use of biofuels in planes.

Co-ordinated by the conservation group Rainforest Rescue, the petition has been signed by 172,000 citizens from across the globe. It argues that using biofuels on a large scale will inevitably accelerate palm oil expansion, resulting in massive deforestation and a surge in greenhouse gas emissions.

It comes as the Second ICAO Conference on Aviation and Alternative Fuels in Mexico City plans to discuss the biofuels “vision” plan, which calls for 128 million tonnes of biofuels to be used in jet engines annually by 2040, rising to 285 million tonnes by 2050.

According to Phys.org, 96 environmental and poverty fighting groups have also jointly released a letter criticising the UN’s plan. They claim that biofuels displace indigenous peoples, while the rapid scaling up of palm oil plantations to meet the new feedstock demand could eventually lead to price hikes for staple foods as a result of competition for land.

"We therefore call on ICAO's Member States to oppose the promotion of biofuels for aviation," the NGOs wrote in the letter. The international arms of ActionAid, Oxfam and Friends of the Earth were among the signatories.

ICAO lists used cooking oil, algae and other feedstocks as potential raw materials for making jet biofuels. However, Brussels based industry watchdog Transport & Environment argues that there are limited amounts of these raw materials that can be sustainably sourced.

Transport & Environment argue in a statement connected to the petition that palm oil is the feedstock that can be most easily sourced to supply the “huge and sudden” increase of biofuels demand, because it is cheapest and most widely available vegetable oil in the market.

“Citizens around the world are very concerned about burning palm oil in planes,” said Klaus Schenk of Rainforest Rescue, in a statement. “The vast use of palm oil for aviation biofuels would destroy the world’s rainforests, the basis of life for local people and the habitats of endangered species such as orangutans.

“We urge ICAO to scrap its misguided biofuels plan.”

Carlos Calvo Ambel, climate and analysis manager at Transport & Environment, said: “Most biofuels are worse for the climate than jet fuels. Establishing a goal even before the rules are set out is putting the cart before the horse. We call on ICAO members to refrain from adopting biofuels targets, even aspirational ones, this week.”

By Phillip Capper from Wellington, New Zealand [CC BY 2.0 (http://creativecommons.org/licenses/by/2.0)], via Wikimedia Commons